by Valentina Solinas
made in italy is the performance that marked the emergence of Babilonia Teatri’s style. It’s composed of eight actions for the stage interrupted by two musical interludes and by a scene change in full lighting. Similarly to Panopticon Frankenstein, the company’s second performance, the piece addresses issues from the media, consumerism and racism.
The show’s pretext comes from an episode from real life, experienced by Valeria Raimondi: the group’s co-founder was in a pizzeria in Verona as the TV news showed images of a wall separating the Moroccan neighbourhood of the city of Padova from the rest of the town being knocked down. She witnessed explosions of anger, insults and curses towards the immigrants, and eventually left the pizzeria feeling disconcerted. Her need to express her rage towards the closed-mindedness of these people gave birth to made in italy, a whole scene of which is dedicated to Italy’s racial problem and to the perils of its provincial mentality. The performance is sparse and only uses a few scenographic elements: garden gnomes are used to construct the last image, and other images are fabricated using glowing coloured threads – at the beginning of the piece, a red apple hangs from one of such threads behind Raimondi and Castellani, framing the apple as a symbol of sin and the two artists as Adam and Eve. 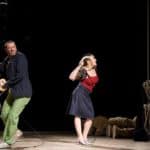 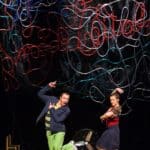 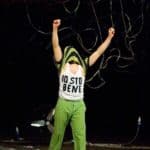 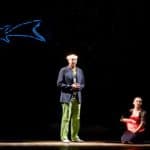