by Donatella Orecchia
In January 1978, Leo de Berardinis and Perla Peragallo brought to the stage Avita murì, “a tragicomic ballad of death.” The idea of an actual encounter with the world of the lumpen proletariat, which had largely kept alive Marigliano’s experience, was now becoming completely passé. And Avita murì was a painful confession of this failure.
Leo is a “shabby Pulcinella trying to speak in Florentine dialect,” Perla “a lame Colombina on crutches”: two masks of the Neapolitan tradition which in southern Italy represent, respectively, the lumpen proletariat, with its perennially unsated hunger; and purity along with the concreteness of the land and procreation.
Two traditional masks that have here become passé. He speaks in Florentine dialect, and she is lame; he is arrogant and their dialogues are trite, mangled proverbs from a popular culture that has gone to seed. As “survivors they grope for words they can no longer find, exchange meaningless dialogue, fish for outworn clichés from the most corny vaudeville, cross-purposes that surpass the early Ionesco, they make do with a caccavella elevated to the dignity of a child, improvising above the Stravinsky of the soundtrack a wonderful concert with two empty beer cans and their voices in microphones.” “Avita a’ murì,” they whisper at varied pitches, “you have to die” (adding: “because you don’t know how to live”). 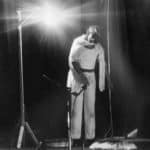 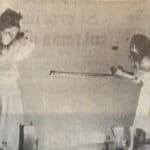