edited by Angela Bozzaotra
Choreographer and dancer Francesca Pennini was born in 1984. She has been practicing contemporary dance, Japanese butoh, martial arts, athletic gym and disco dancing. Since 2005, she has been composing solo works, until in 2008 she was awarded the Prize Giovani Danz’Autori Emilia Romagna. In 2007, in Ferrara, she set up a group of artists, each coming from a different background.
The aesthetics of the group was based on two elements: devising a concept of the body in movement and creating a contrivance that could be amusing, performing, visual, resounding, starting from laboratory studies on the quality of movement.
2012 the group presented *plek at the review “DNA – danza nazionale autoriale” inside RomaEuropa Festival. The performance was radically upsetting: the soprano Floriano d’Auria sang and kept folding and refolding a big sheet. The first immediate reference was to Gilles Deleuze’s concept of folding. In the next two works, <age> and Amleto (2014), the dramaturgy got more consistent and precise. In <age> a group of teenagers addressed the audience through an “existential radiography”.
Amleto was a very different story. The character Amleto did not exist: it was literally elected by the spectators, selected from four unknown performers, who showed off like in the worst reality show, in tragic-comical entr’actes, guided by Francesca Perrini’s off-stage voice. The four dramatis personae, undergoing a sort of torture, scenic and obscene, had to face a merciless – because not appealable – selection, ending with the candidate-to-be Amleto. In case the result of the selection came out totally unexpected, within the opera there was a solid and “studied” structure: a choreography presenting three performers of the group dancing tied to ropes and painted black. 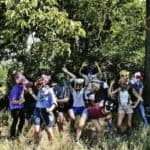