by Alice Fadda
Staged for the first time in 2012, Discorso Grigio was the first Fanny & Alexander show that explicitly addressed an issue of, so to speak, “topical” interest. The text consisted of a long speech made up of several fragments of as many public speeches given by Italian politicians and others, and belonging to different political currents and historical periods. The intent of Fanny & Alexander was to splice together a genuine speech, an imagined one, though composed of real fragments, that was never given in reality, consistent because it had the structure of a speech that was complete in all its parts. The voices of Berlusconi, Renzi, Bossi, Bersani, Grillo, Bertinotti, Napolitano, Casini, Prodi, La Russa, but also Obama, Reagan, Churchill and Hitler, were assembled by the troupe and acted onstage by a President, interpreted by Marco Cavalcoli, who in shirtsleeves, with large headphones on his ears, seemed intent, at the beginning of his act, on rehearsing parts of what would be his speech to the Nation, as if he were hiding in the wings or shut up in his dressing room.
After warming up, the President puts on his jacket, freshens up and comes out into the open on an “imaginary” stage before an audience clamoring for him to appear. It is as if the show were divided into typical on-stage and backstage situations. This on-stage and backstage alternation is then broken as the two spaces/phases blur together: the President is seized by doubt, hesitates, it becomes hard to tell if he is talking to a crowd or to himself, and he seems reminiscent of those typical off the air comments of Italian politicians in TV broadcasts. The President is bombarded by rumors until he is transformed into a kind of crazed puppet that hypnotizes the nation with a speech made only gestures: codified, frantic, exaggerated, some new and others that return from West. The encroaching darkness halts this moment of frenzy. The lights come on again, and the President has two puppet hands, like Mickey Mouse’s, then he comes back on stage wearing an enormous mask resembling Silvio Berlusconi, but his ravaged face seems to come from beyond the grave, like a funerary mask. 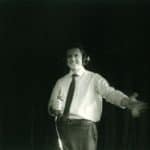 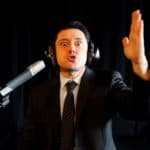 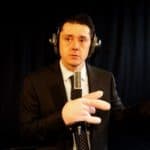 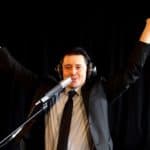